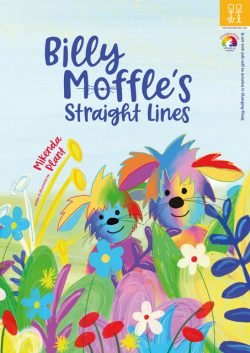 ‘Billy Moffle’s Straight Lines’, the second in Mikenda Plant’s collection of therapeutic stories The Moffles, is now available to buy.

This vibrant picture book explores early life trauma and domestic abuse, and the challenges that both Billy and his new parents journey though.

“Moffles are tiny, fluffy creatures, who carry the colours of their emotions in their fur, for all the world to read like a storybook.

Billy Moffle is very young but already he has become so scared and hurt that he has turned blue and grey. If he just keeps everything straight and tidy, maybe he won’t feel so frightened. Can a new mummy and daddy help him to feel safe again?”

It has been endorsed by Dan Hughes, Founder of DDP:

“Mikenda begins her sensitive and engaging story with the question, ‘Have you ever seen a Moffle?’ If you haven’t, this might be the right time to meet Billy. He’s a young Moffle who has some very hard times in his early years, so hard that his fur turns blue and grey. Discover how love brings back all of Billy’s colours. It helps him discover that the fun of childhood might involve being messy, rather than making straight lines. While Moffles are very quiet and tiny, they and their fur of colours have much to teach us.”

We’ve added ‘Billy Moffle’s Straight Lines‘ to the DDP Library, and you can purchase it directly from The Moffles website.

We were first introduced to the Moffles in ‘Tippy Moffle’s Mirror’ and you can also find Moffle PACE infographics in our library.

Mikenda Plant is a DDP Trainer and Family and Systemic Psychotherapist. She integrates Mindfulness into her therapeutic practice and runs the East Midlands DDP & Mindfulness Interest Group, supported by DDP Connects UK.