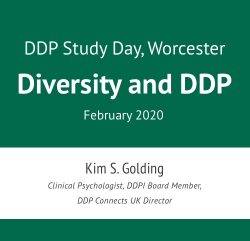 A report exploring diversity in the DDP community by Kim Golding, has been published in the DDP Library.

It follows discussions at the DDP Study Day held in Worcester, UK, this February.

Around 25 people attended and we had a very stimulating day reflecting on Diversity within DDP.

You can read the full report of the day on the DDP Library page Diversity and DDP, where it’s available to download as a PDF.

The Dyadic Developmental Psychotherapy Institute (DDPI) promotes that everyone be treated without discrimination.

Delroy Madden, one of the study day presenters is a member of the new DDPI Racial Equity and Social Justice committee. The committee has been formed to support DDPI in striving to ensure matters concerning racism, homophobia, equality and all forms of discrimination and oppression are addressed and taken into consideration in DDPI’s training, certification process and practice, including DDP-informed parenting.