It’s Not Fair!, new book for children who have suffered a bereavement 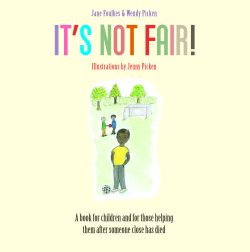 It’s Not Fair! A book for children and for those helping them after someone close has died, has been published.

It is written by Jane Foulkes, independent psychotherapist, Practitioner, Consultant and Trainer in DDP, and Wendy Picken, experienced social worker and bereavement specialist, and is illustrated by Jenny Picken, retired from NHS paediatric services.

“When children have someone significant die their remaining caregivers are often overwhelmed by their own grief and maybe unavailable for a time, meaning that the  children have to cope alone with their maelstrom of feelings.

We wanted to write a book which would help children who have been bereaved feel less isolated.

The book is divided into three parts: the first part describes many of the feelings felt by children who are grieving in order to normalise them. The second and third parts are the stories of Frankie and Albie who have each had a parent die and are struggling to cope in different ways. Each of the children is helped by a kind, caring adult who notices and accepts what is going on for them and helps them to express what they are thinking and feeling inside so that they can begin to make sense of it and to heal.”

It’s Not Fair! has been added to the DDP Library and can be purchased via the book’s website and Amazon.

It’s Not Fair! A book for children and for those helping them after someone close has died