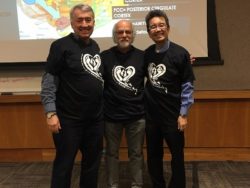 The 2017 DDP conference in Kingston has filled me with joy and awe for the work our DDP community is doing around the world. As our new t-shirt communicates, we are truly changing the world one PACE at a time.

Our three-day event would not have been possible without the generosity of Susan Schumacher, the founder of Attachment Association of Canada. Susan took care of all the registration details and donated her time and money to allow us to be well taken care of at the lovely venue, The Donald Gordon Center.

We kicked off with Danny Yeung teaching us about Accelerated Experiential Dynamic Psychotherapy and a reminder that when we are present with our clients, something comes to us that is just right and, through his introduction to the Resurrection plant, that given the right circumstances we all can begin to grow toward health.

Both Danny and Dan showed a clinical tape that showed how a client, one middle-aged and one just 7 years old, could begin to bear the unbearable with a therapist who was actively present and who was co-regulating the shame and co-creating a story so that the client could find another possibility. Jon Baylin in his usual eloquent way helped us understand how clinical change was mirrored in neurobiological change. 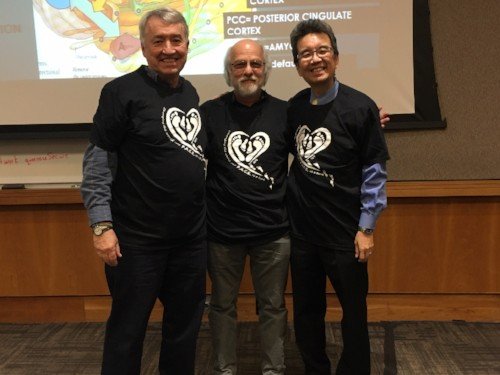 The theme of the three days was storytelling. Some were new stories and some were sequels.

One of my greatest impressions of the three days was the growing of DDP both in terms of new people practicing but also in the deeper understanding and sophistication of those clinicians who have been in the trenches for a while. Leticia Gracia and Taylor Armstrong from the George Hill Center introduced us to their program three years ago. At that time, they were new to the process of having clinicians trained and practicing the work and they reflected an excitement, but also some not-really-sure-what-we-are doing and perhaps-we-are out-of-our-depth moments in this endeavor.

Three years later in their journey, four clinicians are certified, the PACEful language is fully embedded in practice and their children and families are reporting significant change. Parents, in particular, are benefiting from Kim Golding’s Nurturing Attachment parent-training program. They are pioneers in Ontario and helping other agencies seeing the value in placing the relationship full front and center in our work. Also encouraging is to see the practice of psychiatry integrate PACE into its understanding.

Also three years ago, Deni Melim, Jerry Fowler and Doug Hepburn introduced to the community the Belong Program, a program they and I started in 2013. The Belong program is a section 23 classroom that uses PACE and other DDP principles as the guiding framework.

Deni told story after story of how the staff help the students change their core narrative (I am bad, stupid and unworthy) through their relationship with them and the support of their families. Students seem to learn in their first year how to trust the adults and in their second year to trust each other.

Deni emailed me the day after the conference to share that one of our graduates had responded to a situation with a peer in his new school using all the language he had learned from the staff in his two years. A peer had pulled his pants down while in line. He was embarrassed and a little worried. He was able to tell his mum how he felt and who then with the help of the principal had a meeting with her son, the offending peer and the principal. As she wrote to Deni,

“I was more worried about the other student at the end of our meeting than my son, John. He told this peer how she had made him feel. The girl who had pulled down his pants professed that she was really sorry but John said that he wasn’t yet ready to hear sorry and that he would “repair” with her tomorrow.”

This story is remarkable not only in that John now uses PACE with his peers but that his mum Is transferring her hard-earned ability to trust from Deni to the Principal in her son’s new school. The success of any program is what happens after you leave it.

As we all learned from Bill Penner in his presentation on Storytelling: Act I (the characters and setting) – a very anxious and fearful mother who had medical problems. And at times aggressive son who was couldn’t manage school as he was preoccupied with his mother’s well-being and worries about a father that he was not allowed to see because of drug issues. A family situation where mum often could not be well enough to get her son to school.

Act II – (suspense and drama) Ben came to the Belong program. Would he show up or would he not? When his mum couldn’t get him out of bed, one of the staff went to get him. When he was too fearful to take risks or join in the play, his staff gently stayed with him and reflected what he might be experiencing and helped him find the words. When he resorted to crying to get his way, staff playfully named his excellent strategy for getting people to pay attention to him and how grateful they were to him for letting them know that he needed them and offered him some words that he could use when he was ready.

Act III; (a transformation or the opportunity for a different perspective). Ben and his mother now have shifted their shame-based narrative. They are both able to reach out for help when needed and believe that they deserve the space they take up on this planet. Ben is now able to self-regulate, to tolerate hard experiences and repair his relationships. Of course, he will continue to face obstacles and challenges, but he now knows that with help and persistence they can be overcome.

In addition to the Belong program, three administrators from Kingston’s North End Schools presented their journey using PACE in a whole school setting. Their commitment and persistence and understanding that they are working to change a culture, not behaviour and that this will take time is helping education make the paradigm shift needed to support our vulnerable students.

They shared many stories about how they and their staff look underneath the behaviour, help children become curious about why they are doing what they are doing and find what they can begin to do. I am so lucky to work with these amazing educators and puffy proud of their work.

Brandon Mock and the Kids TLC program are also three more years into their DDP program in Kansas and treated us all to how PACE has become beautifully embedded in a residential treatment program for very complex and distressed kids and families. They showed some lovely work with how they help staff remain regulated and PACEful (I think that the OXFORD English dictionary should add PACEful as a verb in its next go around. If Selfie is included I think PACEful PACEing should be added as noun and verb!).

They also showed some video of how they help parents learn PACE and how that help to parents is offered even after the child is discharged from the program. Kids TLC are successfully treating some of our most vulnerable and dysregulated children again by understanding that change comes from intersubjectivity, the forming of safe relationships and by using what we know about the brain. Helping us become competent companions for these children and parents.

Did I say we are changing the world one PACE at a time!

Peppered throughout our three days we were treated to clinical examples by Courtney Rennicke and Leah Langsam from New York, Laura Shughar from George Hull, Betty Brouwer and Hannah Sun-Read from Ontario who bravely showed us their work with clients. All were working with the clients to form different stories to move them from Act II to Act III, away from the dorsal vagal nerve, away from the sympathetic nervous system and into using the smart vagal nerve, the ability to move into possibility of something different. 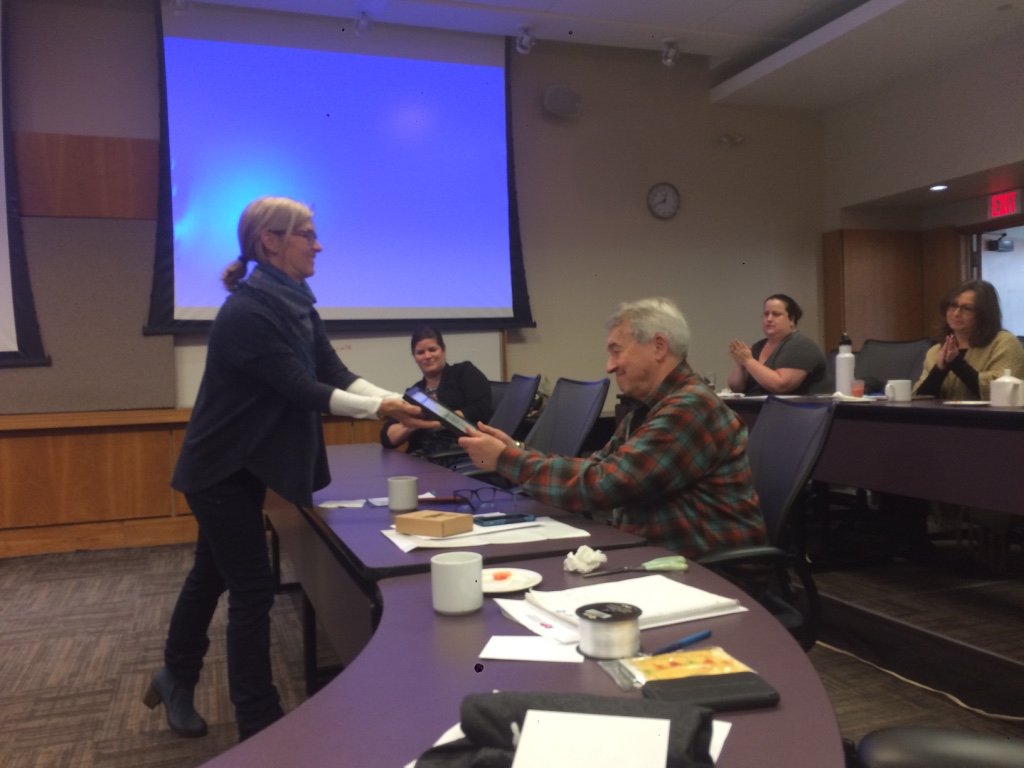 We were fueled by all of the amazing work people are doing, but perhaps more importantly fuelled by each other over these three days. Old friends reconnected and met new friends and our DDP network continues to grow.

We were thankful to have Julie, Gill and Sarah travel from the UK to be with us. DDP in the UK has a very strong presence.

It is remarkable that our community started with one man, Dan Hughes, believing 40 years ago that we had to find new ways of working with children who had experienced trauma. He has relentlessly pursued this quest, developed DDP and taken it across the world. Although perhaps not the best analogy I liken it to the Center for Disease Control tracking down how one person with Ebola infects so many others all over the world.

In recognition of Dan’s dedication Kim Golding in the UK presented him with a Life Time Achievement Award in September during their conference.  We presented the same award to him here in Canada to a standing ovation. Thank you Dan!

Thank you also to those who were able to attend the conference and I’m sorry that we missed many of you. There will be another conference next year in October and in May 2019 in the UK. Use the website ddpnetwork.org to find out about study days in your area and always feel free to reach out to consultants, trainers and board members with questions or for support.