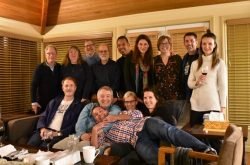 Our DDP International Conference this year was held in Cobourg Ontario, Canada.

Fourteen years ago, I was first introduced to DDP in the small basement of Grace United Church along with some other colleagues when Sandra Webb first brought Dan to Cobourg.  At that time, Dan Hughes, Deb Shell, Robert Spotswood and Art Becker Weidman were playing around with the idea of an institute to introduce this way of working to a larger audience. Dan would come to Cobourg each year for a weekend and we would get together at someone’s house, eat, drink, eat and drink more and then try to learn how to do DDP like Dan. Now 14 years later that same group continues to be good friends and have realized that we don’t have to be Dan to do DDP!

Our conference this year was a testament to how far the ripples of DDP have spread. Kim Golding and Ben Gurney-Smith joined us from the UK and Alberto Veloso and his partner Lexie joined us from Melbourne Australia. From the USA we had participants from Kansas, many parts of the Eastern Seaboard and California. Canada was well represented with people from all over Ontario. The DDP community is growing ever bigger.

We had three full days of learning. Play, persistence and permission for the long game were among the three themes woven through our time together. Jon Baylin in his imitable fashion taught us more about the neurobiology of mistrust. Dynorphins was the new insight about how children who have been hurt protect themselves from the pain of physical and emotional hurt and how that might look on a behavioral level. We were all reminded about the importance of the patient, strong, regulated adult who can see the child beneath the behavior and can reawaken the child’s pain so that they can begin to seek comfort. How to patiently and persistently allow the child to learn to play. Dan then illustrated how improv and DDP fit so beautifully together. Say “yes….and…”, allow yourself to be surprised, notice, show up and have the confidence to start anywhere – the story will develop from where you are, enjoy making mistakes and let your “self” shine through.

Ben Gurney-Smith who with his PHD student, Megan, just had the first robust study of DDP published, took us through the results. Parents were often sceptical initially but came to really value the DDP experience, citing acceptance as a key construct that differentiated DDP from other therapies they had tried. All families saw improvement in their child’s understanding of themselves and others, emotion regulation, increased empathy and a greater sense of security. Progress led some parents to conclude the DDP ultimately kept the family together.  Finally some evidence to back up what we all know and show that DDP does do what it says on the tin (can)!

Kim Golding wove her magic Monday afternoon, masterfully weaving a story about her work with a young person who she had known for some time and then came for therapy as a young adult to further understand her trauma. Persistence, playfulness and “being with” for the long game! Kim’s incredible capacity to engender safety and being “’the Someone Kind” helped her client manage her despair and find the courage to start relying on others and renewed our commitment to the intersubjective process.

Julie Salverson then helped us remember the value of play, the importance of making mistakes and being in the moment, essential skills for any DDP therapist. Her reminder that play is another way of looking, a quality of attention, an openness to options and a provocation to our imaginations, an attitude to living and an enrichment or meaning. In tune with Dan’s improv wisdom of the morning, Julie quoted Sonia Norris “we want to see YOU, not someone safe or nice, someone alive and ugly in their humanity.” Certainly, as DDP therapists, our selves are our best tool and often our priority in learning is to get out the way of that self.

Tuesday brought together educators who are using DDPractice as the framework to develop Trauma Informed Schools. One year further in our efforts, we again stress the importance of the long game. Rob Lloyd, Jen Ramsay and Mike Blackburn passionately told stories of how the use of PACE helped students get settled to learn. We explored how to support teachers in their journey as the relentlessness lack of reciprocity of mistrusting brains was hard to manage. Connection with students and connection through learning teams and with administrators as well as ongoing professional development was stressed.

In the spirit of connection, an old and dear friend came to share stories about how her team supported at-risk adolescents at Normal Johnson Alternative High School in Ottawa. Rose and I met while working at a camp for children with learning disabilities and spent several intense summers figuring out how to calm alarmed nervous systems, convince kids to come down from the cabin roof and help children make relationships. Little did we know that we would spend the next 30 years doing the same thing.

Our careers took us in different directions as they often do but when we re-connected last summer we realized how similar our understanding and perspectives were and how formative those camp summers were.  Although Rose had never heard of DDP and PACE she and her team were the embodiment of it. In the spirit of camp practice we debriefed following the conference and she still wasn’t quite sure what this PACE thing was but is keen to put a framework on what is already a beautiful trauma-informed practice that arose out of a team’s absolute assurance that the only way to help at-risk youth manage an education was to like them, form relationships with them and walk-beside them in their struggles whilst also providing creative and flexible education.

To finish off our focus on schools, Deni Melum shared what we have been up to with the Belong Program this year. We will hopefully have our book out for you to read next year illustrating how DDP principles are the bedrock of the program. Stay tuned!

Cobourg is also the home to Therapeutic Family Care (TFC), a program that works with complex families. Duane Durham has steadfastly supported his team in providing training around trauma and has trained his team in DDP and provides ongoing consultation not only to his team but to others who are interested in learning about attachment-focused treatment. The TFC team thankfully have a terrific sense of humour as forming relationships with mistrusting parents in the midst of dogs, cats, parrots flying overhead, several children needing attention is no mean feat. Their persistence and commitment to the DDP framework is inspiring and we know things are working when parents are teaching their neighbours to parent with PACE!

Wednesday was a rich and many rippled day…. Brandon Mock presented the Kids TLC program from Kansas which will shortly be the first DDP certified organization. PACE is so thoroughly woven through all aspects of the program with safety developing in a parallel process between kids, parents and staff. Not a point system in place! The commitment to training staff is fierce and Brandon showed how a former staff who was now a police officer used his PACE skills to regulate a distressed suicidal man. Rather than being frustrated with training staff and having them leave the program, the team see it as an opportunity to spread PACE further afield. Parents in recognition of the long game are able to attend parenting groups long after their child has left the residential program. We will be having out next conference in Kansas next Sept 8-10th. Save the date!

Alberto Veloso, a psychiatrist from Australia described the beginning of weaving DDP into an inpatient, adolescent unit as well as trying to convince the outpatient team that attachment focused therapy is the way to go. We have no doubt that Alberto’s energy will inspire his team and, in a few years, DDP will be well integrated like in TFC, KidsTLC, George Hull and be a model for others to follow.  Charlie Menendez from Peterborough Ontario showed powerfully how DDP can work in a residential setting with developmentally delayed young adults. His young client so graciously and bravely allowed us to see some of her work integrating her trauma and allowing her workers to comfort her in her sorrow. A different energy was shown in Michelle Hogeterp and Tanya Eisler’s work integrating DDP with Sensory Integration work with children with FASD. Following Jane Koomar’s work from Boston, Tanya and Michelle, integrate the co-regulation through PACE with sensory activities. We all wished that we had their room full of balls, trampoline, bean bags, weighted blankets to regulate ourselves at lunch time!

And to finish our three days, George Thompson from Kids TLC helped us know the ancient truth of “being with” to bear suffering and sent us on our way knowing that our DDP practice is actually a meditation practice. We train ourselves to pay close attention to moment to moment changes in emotional states in our client and ourselves, we maintain a state of not-knowing curiosity, develop and hold a compassionate perspective in the face of threat, hold a strong  intention to be of help and a commitment to self-reflection and ego-dissolving repair. This was a lesson I was glad to hear since I always struggle to slow my mind and give myself a failing grade on “mindfulness”. I now understand why I feel so much better after a DDP session than a CBT one — I am being mindful!

I am writing as I fly to Australia to meet the growing excitement for DDP in the Southern hemisphere. I have just woken up thinking that I had slept for a long time to realize that we are not even half way over the ocean. My “entertainment system” is broken so I am entertained in a different way, remembering the fellowship, playfulness, scholarship and commitment of everyone who attended the DDP conference. Gary, who will forever be known as Honeybun, Charlie’s calm as technology failed him but with his openness and spirit shared his capacity to be moved by his client, Kim’s gentle voice, Hannah’s incredible capacity to care for us all, everyone’s commitment to put busy lives on hold to be present with one another for three days. We missed Robert Spottswood and Deb Shell, two of those founding DDPI members, who were not able to be with us, but were there in spirit.

I am thankful to be part of a growing community where I feel there is a refuge against the disconnection and inhumanity that Trump espouses and the growing permission to divide and dehumanize that is occurring in our global communities. In a recent conversation with Robert Spottswood, he reminded me that we must use that refuse to gain strength to fight injustices. He stated “The treatment of children in Nauru, Texas, Gaza, the refugee camps that offer no hope, require us to be vocal about the need for adults in all governments to make the developmental needs of children to be the center of the known universe against which all official motions are measured.” Signed Vermonters for cage-free children – no ICE

For those of you who missed the conference, slides are available in the DDP Library. I look forward to seeing some of you in the UK in April 2019 for the UK DDPI conference and in the US in September 2019. 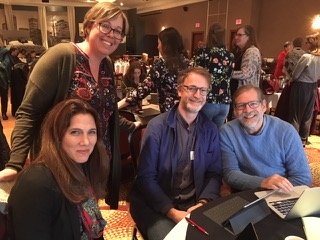