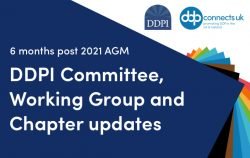 DDPI ran the first 6 month AGM check-in meeting at the end of June. This was a great opportunity for all the DDPI committees, working groups and chapters, who you will have heard from at the 2021 AGM, to get together and discuss what they’re working on and what they have achieved.

As part of the DDPI’s transition process to a more fully integrated worldwide organisation, committees and working groups have now all come under DDPI, where previously DDP Connects UK had overseen, maintained and run most of them. DDPI now has a dedicated Operations team, led by Leila Caston, Director of Operations and Lead Administrator, working with Liz Tower, Director of Communications and DDP Network website Administrator. They are overseen by the DDP Worldwide Working Group (composed of Courtney Rennicke, Betty Brouwer, Alison Keith, and Joy Gamble), making day-to-day operational decisions and supporting the DDPI Board through the transition process.

We’ve selected some highlights from the meeting to share with you, some you may have heard about and others will be new. There are also several committees who are looking for new members and we encourage everyone in our DDP community to see if they would like to volunteer.

The Research Committee continues to support the UK-based Relationships in Good Hands (RIGHT) Trial, funded by NIHR, into the effectiveness of DDP.  They have helped particularly with overcoming hurdles in the feasibility phase of the trial and addressing questions that arise through the quality control group. The committee are keen to develop the DDP practice evidence base, and to do this need new members who live in countries other than the UK.

Want to help? Find out about joining the Research Committee.

This team developed out of the now retired Website Operations Team and initial Communications group. They have created new editorial guidance that operates as a living document, and are using this with all public communications, moving DDPI towards a more robust system of communications with a shared vision and responsibility. The next steps are to update and expand the guidance, specifically around moving away from a White centred voice, and start to update existing public facing content.

The Community Development Committee supports local peer support groups. This year they are excited to announce a new Online Specialist DDP Interest Group for Residential Settings and Sawubona: DDP Interest Group for self-identified Black, Asian and Global Majority DDP community members, both starting in September and based in the UK. They are looking to launch new groups with Organisational and Educational specialisms, as well as expanding their work more globally, and specifically into Australia, and so would like new members.

Find out about joining the Community Development Committee.

This new group, with representation from across four states, is looking to support the continued growth of DDP in Australia. They are developing a clear mission statement to guide their focus and looking to strengthen their links with DDPI and members in the Northern Hemisphere.

The RESJ Committee have been growing their advisory role and developing strategic programs to help embed RESJ cultural competencies within the DDP community and support all our members with peer to peer discussion groups focussing on ideas around racial equity, LGBTQIA+, disability and ableism, sexism and all their intersections. A significant step forward was the removal of the DVD that accompanied the Attachment-Focused Family Therapy Workbook at the recommendation of the committee. The DVD included an example with actors which contained insensitive material with harmful, racist and heteronormative content. Together with the Training Committee they are supporting the creation of new training material to the benefit of all our members and our global community.

The Training Committee is a relatively new group with members living in Australia, Canada, United Kingdom and United States. They are working on the quality of training, developing resources and making training accessible to people from marginalised groups. A specific focus is to ensure that future materials are representative and inclusive for training attendees, and reflect the lived experience of adoptive, foster, kinship and residential families and its intersection with race, identity, gender, sexuality, disability, class and religion.

An operational committee, Professional Standards ensures the safety of all members and clients and upholds professional and ethical standards. All of their work is confidential and they aim to create safety and security throughout the complaint process. They are looking to recruit new members who are experienced DDP Practitioners.

Find out about joining the Professional Standards Committee.

DDP Connects UK is a Community Interest Company whose focus is on growing and developing DDP in the UK. DDP Connects UK have been instrumental in contributing to the overall expansion of DDP worldwide by supporting DDPI and taking the lead in the past on a number of developments, including the DDP model, training, certification, organisations embedding DDP, publishing books and the RIGHT Trial.

They are currently working on setting up an Inclusion Fund in order to support the funding of a specific DDP Level Two training to support diverse needs and the new Sawubona: DDP Interest Group for self-identified Black, Asian and Global Majority DDP community members. They are also supporting a pilot of a worldwide new DDP Trainer mentoring group and looking forward to developing a new UK specific focus as a chapter of DDPI.

This Working Group is examining the current Organisation DDP Certification process and support in order to recommend changes and improvements. It has conducted a comprehensive survey of organisations who have been involved in the process and are excited about the quantity and quality of responses. Results and recommendations will then be submitted to the DDPI Board for implementation.

The Global Development Committee is made up of eight dedicated members from five countries, and promotes and supports the development of DDP globally. This year they have created an attestation form for clinicians who wish to enter practicum but practice in countries that do not have adequate insurance or regulatory system, allowing more access for the global DDP communities. They have also developed and are using new guidelines for training requests from countries new to DDP, identifying country leads from the committee to work with and support organisations in the new country and the DDP Trainers and Consultants.

We hope you can join us!