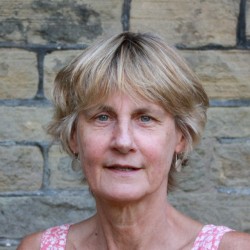 Please join us in celebrating former DDPI Board member, DDP Practitioner, Consultant and Trainer, Geraldine Casswell on her retirement as a DDPI Member.

Geraldine was one of the first UK practitioners who were trained by Dan Hughes in the early 2000s, and who later went on to work with him to introduce and set-up DDP in the UK. She has presented at international DDP conferences and was also integral to the creation of DDP Connects UK, a UK community interest company (CIC) and has been an DDP Connects UK Honorary Associate.

She has provided a reflection for the DDP Library, “Taking off the uniform”, within which Geraldine explores her career in DDP, and how it has shaped her life and work. She reflects on how it feels for her to remove her “uniform” at this time of great change and how DDP has created a positive, “deep imprint” on her life.

We have included below two personal reflections about Geraldine, the first from Dan Hughes and the second from Sez Morse.

We would like to join them both and extend our love and appreciation to Geraldine, along with the many colleagues whose lives have been touched and influenced through their relationships with her.

“Years ago, when DDP was getting off the ground, I met Geraldine Casswell. In Maine. She had decided to travel from York, England and come to Maine to take Level One. A long and expensive trip to learn about a model of therapy and care for traumatized children that was not well known. I was impressed then by her commitment to find ways to better help these children. And for many reasons, I have been impressed by Geraldine ever since.

DDP was created for therapists like Geraldine because it gives expression to their best qualities in assisting children who do not trust and their caregivers who struggle to care for them. And Geraldine’s qualities are many. She is a skilled psychologist, a gifted therapist and a sensitive clinician who is able to discover the various strengths in others. And because of her own strength, she is able to give others the confidence needed to face their traumas, their losses, their shame and their doubts.

One could not describe Geraldine without describing her presence. When Geraldine is speaking with someone— child, parent, colleague, friend — I am aware of how fully present she is. That person has her full attention, her mind and her heart. I am certain that she would be no different were she speaking with the Prime Minister or a homeless person on the streets of London. If you want to understand intersubjectivity you might look at a parent fully engaged with her infant…or Geraldine fully engaged with anyone.

Nor could one describe Geraldine without describing her innate spirituality. Her religion does not define Geraldine, her spirituality gives her religion its depth and meaning. If you want to understand PACE, you might observe how Geraldine is engaged with others, and equally how she is at rest if she is sitting alone.

Yes, Geraldine became a part of DDP in its early days and because of her active engagement in its development, DDP has much greater depth and breadth than it would have without her. If DDP remains vibrant and of value 50 or 100 years from now, it will be due in part to Geraldine having brought her unique presence, vitality and compassionate mind to its development, greatly influencing what it has become.

“My very first meeting with Geraldine is one that actually still, many years later, tends to trigger some shame in me when I remember it. As I am amongst PACEful folk here I guess I am safe enough to confess the murky truth. To set the scene –  I am sitting, full of anticipation, in the beautiful training room at Family Futures in London, ready to commence my DDP Level Two training. Dan Hughes arrives accompanied by another trainer whom he introduces as Geraldine Casswell and I think “Hmmm… I really wanted Dan Hughes to teach me not this other person”. Well, here was my first real lesson a central tenet of DDP, “Make no Assumptions”. By coffee break I knew I wanted Geraldine as my practicum supervisor and I hadn’t even know I had wanted to do the certification practicum until then.

I became hooked on DDP thanks to a very short amount of time with Geraldine and what I became most aware of was her powerful yet understated way of instilling the belief in me that I could actually become a practitioner and how that might actually look in a UK context. It felt as though, through Geraldine’s secondary intersubjective experience of DDP and of me, the process of becoming a DDP practitioner became not only manageable but actually highly engaging and exciting.

Geraldine has guided and held me and many fellow supervisees whom I approached for their experiences when writing this piece, through some of the most challenging, lonely and dark times that arise when you are immersed as a practitioner in the lives of traumatised children and young people. We share a deep gratitude for her kindness, generous sharing of a lifetime of wisdom, gentle challenge and ability to convey deep compassion for us each as practitioners and in equal measure the struggling shamed adults and young folk we walk alongside.  She has unfailingly been the epitome of PACE and an unconditional and non-evaluative support for me whilst challenging and pushing me, stretching my intellectual, emotional and psychological bandwidth and sharing wonderful poems and quotes from ancient mythology, theology and literature such is the breadth and width of her experience and wisdom.

“The story goes that Pam T, who did a lot of expert witness work, named me in a case at court as someone who could do Attachment Work.  The judge referred it to CAMHS!  This was late 90’s. Although I was familiar with attachment theory I was not quite sure what she was specifically thinking of- so the search began. Sue Golding, a psychologist in the South Yorkshire region was a step ahead and had done Dan’s level 1 and so I asked more, read Building the Bonds and thought that’s it!  Amazingly (this was when CAMHS was funded) the NHS paid for me and a colleague to do level 1 in Maine in about 2002.  It was cheaper than doing it here! This was an infamous trip as there were 4 other Brits from Yorkshire and we all got a little merry at the lobster barbeque (don’t think Dan ever did one of those again!)”

It has felt a privilege to have sat with Geraldine through many hours of supervision, meetings and conferences, folk dancing in Birmingham, highland dancing in Scotland, line dancing in Stratford (I still have no idea why DDP gatherings always end in some sort of dancing ?!). And, oh my, at my first terrifying conference presentation, there was Geraldine, beaming support from the front row as her wonderfully wise words – “Hope is the most important therapeutic variable”  – echoed through my work.

When my daughter had an interview for medical school in Geraldine’s home town of York, we were welcomed with open arms after a long drive on very wet, stormy winter night into the vicarage from where Geraldine and David offered endless amounts of love, care and support to so many over the years. There awaited us a haven of warmth and safety – keenly listening ears, a roaring fire, hot tea and electric blankets to warm the beds in the beautiful old vicarage. In the morning a bountiful breakfast was followed by the rare treat of supervision in person in front of the fire.

Years later, another long, anxious drive to my very first solo Level One training in the Northwest, serendipitously took me past Geraldine’s and David’s new eco home following David’s retirement from his official post – charitable commitments have since continued to keep them both busy alongside their many creative and sporting activities and grandparent duties. Again, their somewhat more modern, streamlined door was thrown open to enter a world of safety and creativity – both Geraldine and David are talented artists which they express through various mediums. Geraldine recently showed me an illustrated book she is taking delight in making for her granddaughter and the house is filled with striking artwork created by them and their daughter and collected on their wide-ranging travels. Afternoon tea followed, complete with delicious vegan cake, PACE for my nerves and the shared experience of ways to get through your first solo training!

For me it was a lonely journey to certification and I have absolutely no doubt that without Geraldine I would not have come through the process with anywhere near the depth and breadth of learning I have gained from her supervision and friendship. I have always known from my colleagues that Geraldine is widely and dearly held at the very heart of our DDP community. Dan has often shared how he holds her up as an exceptional practitioner and a treasured friend. Being given the opportunity to write this piece and to share so much about our beloved Geraldine has felt such an honour and a privilege but I would be lying if I didn’t also admit that it has been a big old struggle because of course, how do you let go of such a precious secure base without resistance?

It is no surprise that Geraldine has prepared for this new chapter in her life by following Jung on the bold searching journey within which needs to begin as we go into the later stages of life, and yet which many do not dare to face. What I have noticed above all about Geraldine is that she faces difficulty head-on, embracing her own insecurities and vulnerabilities, and by doing so she has inspired me and many others to do the same. The very first day we met at that level two training, she shared a quote which in an opportunely circular way comes back to me now to send her off:

Thank you Geraldine for giving DDP and me so very, very much.”

You can find Geraldine’s reflection in the DDP Library, link below:

Taking off the uniform