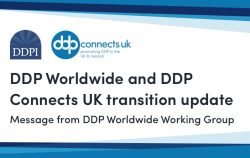 Over the next few days and weeks you will begin to get more information about some of the changes that are happening as the DDP Worldwide Working Group (comprised of Courtney Rennicke, Betty Brouwer, Alison Keith, and Joy Gamble) continues to make recommendations and take action to transition DDPI to a more fully integrated worldwide organisation.

Background to the transition

The four of us initially came together as a group of 4 chairs (past and present) representing DDP Connects UK and DDPI who were all keen to see DDP continue to grow and be relevant. We realised that there was increasing duplication and shared themes across the two organisations and felt that in order for DDP to continue to grow on a global level we needed to streamline our work.

From there we met with the ‘Elders of DDP’ (Dan Hughes, Sian Philips, Julie Hudson, Kim Golding and Edwina Grant) who graciously encouraged us and gave us their blessing to ‘go lead’. For the past 9 months the four of us have taken on this task that we have been given, working hard behind the scenes to develop a worldwide organisation. We wanted to publicly address our DDP members, especially those in the UK, for who we imagine the changes may feel more significant as you have grown used to DDP Connects UK CIC running things so efficiently and robustly for the past 5 years.

First, we thought it might be helpful to  give you a little context about the current changes and movement towards a DDP Worldwide organisation.

Some of you might remember that the Dyadic Developmental Psychotherapy Institute (DDPI) was formally set up as a corporation in the United States back in 2009. DDPI was set up to certify individuals as DDP Practitioners, Consultants, and Trainers and provide a robust framework striving to guarantee the quality of DDP Practice. The initial board was comprised of people from the UK, USA and Canada (i.e. Dan Hughes and key DDPI founding members Julie Hudson, Kim Golding, Sian Phillips, Robert Spottswood, Deb Shell, Edwina Grant).

DDP began to grow significantly in the UK as a number of UK DDP members including Julie Hudson, Kim Golding and Edwina Grant worked hard with Dan Hughes to develop a UK community in the UK. As interest grew, Julie Hudson bought and set up a website for DDP (2014) with the full support of the DDPI Board. This was a huge undertaking (thanks Julie and Liz Tower ) that has greatly contributed greatly to DDP’s infrastructure, public visibility and ability to grow as an organisation.

As part of the transition of DDPI becoming a worldwide organisation the website was bought in November 2021 and is now managed by DDPI. During this same time, Kim Golding, another DDP Connects UK Director, worked tirelessly behind the scenes to create robust certification and training guidance for DDP Connects UK DDP Consultants and Trainers that has been a model for the rest of the organisation.

As a result of DDP continuing its rapid growth in the UK, DDP Connects UK CIC was then formed in 2017 to meet the UK membership’s needs to have more administrative support within the UK,  to keep up with its rapid growth and to have a formal place to hold its finances. As well as growing and developing DDP in the UK, DDP Connects UK have also been instrumental in contributing to the overall expansion of DDP in a worldwide capacity supporting DDPI and taking the lead on a number of developments. It is fair to say that DDP in the rest of the world, whilst growing, has not grown at the same rate as within the UK. This led to DDP Connects UK generating more revenue and developing training innovations more quickly than the rest of the world.

Once DDP Connects UK launched, another DDP Connects UK director, Gill Maxwell, took on the lion’s share of the administration, operational strategizing and day to day running of the company, investing time and care into the many personal relationships that have built trust and safety in the DDP Connects UK organisation. Supporting Julie and Gill in their website operations, strategic and administrative work has been Liz Tower, the ddpnetwork.org website designer, who developed an online database to safely store, collate, and update all information related to membership, certification and training. Leila Caston, systems organiser for DDP Connects UK, was next brought in to work alongside the directors and to assist in developing and implementing many of the operations systems within DDP Connects UK.

DDP Connects UK (CIC) has achieved so much over the past 5 years (please watch this space for a report being published soon celebrating a lot of the work that the CIC has achieved). From its inception DDP Connects UK was set up to work in conjunction with DDPI. As well as growing and developing DDP in the UK, DDP Connects UK have also been instrumental in contributing to the overall expansion of DDP in a worldwide capacity supporting DDPI and taking the lead on a number of developments.

Creation of DDPI Board Chair

In 2018 DDPI created a new role of Board Chair that began the process of ensuring that DDPI would continue after Dan Hughes presidency and board leadership. The role of chair was first held by Betty Brouwer for a term of three years and now Courtney Rennicke. Both Betty and Courtney were able to build on the growth and work done before and steer DDPI to a place where they can uphold their position as the main DDP institute responsible for training, certification and providing a framework of practice for its members. All this thinking has been done within the context of striving towards growing an organisation that will have a legacy past its founder and founding members, and embed anti-racist and anti-oppressive values in any future organisational planning.

For the past 9 months the four of us have taken on this task to develop a worldwide organisation. Some of you will have heard about it at the most recent AGM (November 2021) or have read about it in recent emails and postings. The transition has now begun in earnest. For UK members this will mean that some of the tasks that DDP Connects UK have been doing will now be administered through DDPI worldwide. Within the next week or so DDP members will receive details of these changes and what it will mean for you (e.g. paying of annual fees etc).

We want to pause and acknowledge that the work of DDP Connects UK over the past 5 years has played a significant role in making it possible for DDPI to truly become a global organisation. We know that all DDP Connects UK Directors past and present have worked so hard to get us to this place. We particularly wanted to thank Julie Hudson and Gill Maxwell for all their work in setting up the organisational infrastructure, for Julie for leading on the website for 7 years, and to Kim Golding for leading on training in the UK and across the world. All the work that has been done has created a fantastic springboard from which to launch DDP Worldwide.

We are excited and hopeful about the transitions that are underway and believe it will set DDPI to be a worldwide organisation. We are hopeful that without having to hold many worldwide operational and administrative responsibilities this transition will enable DDP Connects UK to focus on concentrating more on the developments within the UK.