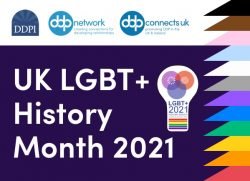 February is LGBT+ History Month in the UK. This annual celebration aims to educate children and young people about the history of the gay rights movement and the issues faced by LGBT+ people.

We would like to share with you how it came about, the impact of Section 28 on same-sex parented families and our new DDP Library resources and links around parenting, education and DDP.

LBGT, LGBT+ and LGBTQ+ are all used in this news post. This does not aim to exclude and discredit anyone’s experience. Differences reflect the letters used by organisations and authors.

LGBT+ History Month originated in the US in 1994 and started in the UK in 2005. It was organised as part of the Schools Out UK project, who have ‘over 45 years of campaigning for LGBT+ inclusion’.

The first UK event was held in February to coincide with the 2003 abolition of Section 28 of the Local Government Act 1988. Section 28 was a piece of legislation, introduced by the  Conservative government, stating that local authorities were not allowed to “intentionally promote homosexuality or publish material with the intention of promoting homosexuality”.

Created in the wake of the AIDS epidemic, Section 28 aimed to solidify the anti-gay sentiment that AIDS had provoked. There was a lot of what we would now call “hate crimes” being perpetrated and unchallenged in the UK and the legislation pushed that agenda.

In the late 80’s and early 90’s some were lying in the road protesting at how many gay men were dying because of the lack of interest in finding a cure for a horrific epidemic.  Pride marches were policed as if those attending were criminals while all they  were doing was starting to claim space. Russell T. Davies’ recent Channel 4 TV series It’s a Sin, gives flavour of how things were.

Today some things have changed. In 2021 lesbian and gay couples are able to marry, adopt, have IVF and even be included in TV adverts. It’s a massive cultural shift affecting both our perception of family and the experience of families.

Section 28 was recent legislation, only ending in 2003. Even today many people aren’t aware of this and are horrified when they hear about the impact.

Section 28 was instrumental as a call to action to challenge homophobia. We celebrate these changes every day. We also ask that none of us start to believe that the task to challenge homophobia and heteronormativity is ‘done’ in the UK or in any country. A start has been made. There is much to do, as the resources in this news post demonstrate.

Georgia Cooper, DDP Practitioner, has kindly made available resources for professionals who are using DDP with LGBTQ+ parents and carers of adopted children. Currently 1 in 6 adoptions in England (from 2020 data) are to same-sex couples.

“…if we choose not to see or acknowledge the difference gender or sexuality bring to family dynamics then we are missing the context of the children we are wanting to support. We are not seeing the whole narrative for that child and that is an omission that needs to be explored.”

They have been added to the DDP Library and include LGBTQ parents & DDP: How important is sexuality in our experience of parenting and being parented, Straight parent advantages and Timeline of UK LGBT Events.

Resources and links for parents, professionals and educators

The LGBT+ History Month website contains a comprehensive list of resources available to download, including posters, factsheets, lesson plans, education packs and fantastic links about the history of the Pride flags.

BBC Sounds have produced a podcast called Pride & Joy: A podcast about how queers have kids which explores the many ways LGBT+ people become parents.

Brighton & Hove City Libraries have added an online story time videos to their YouTube channel for LGBT+ History Month, including ‘Mixed: An inspiring story about colour’ by Arree Chung. You can also watch the Drag Queen Story Hour recorded on 15 February, via their Facebook Live page.

To engage with and find out about more resources and online events, you can search Twitter using the hashtag #LGBTHM21.